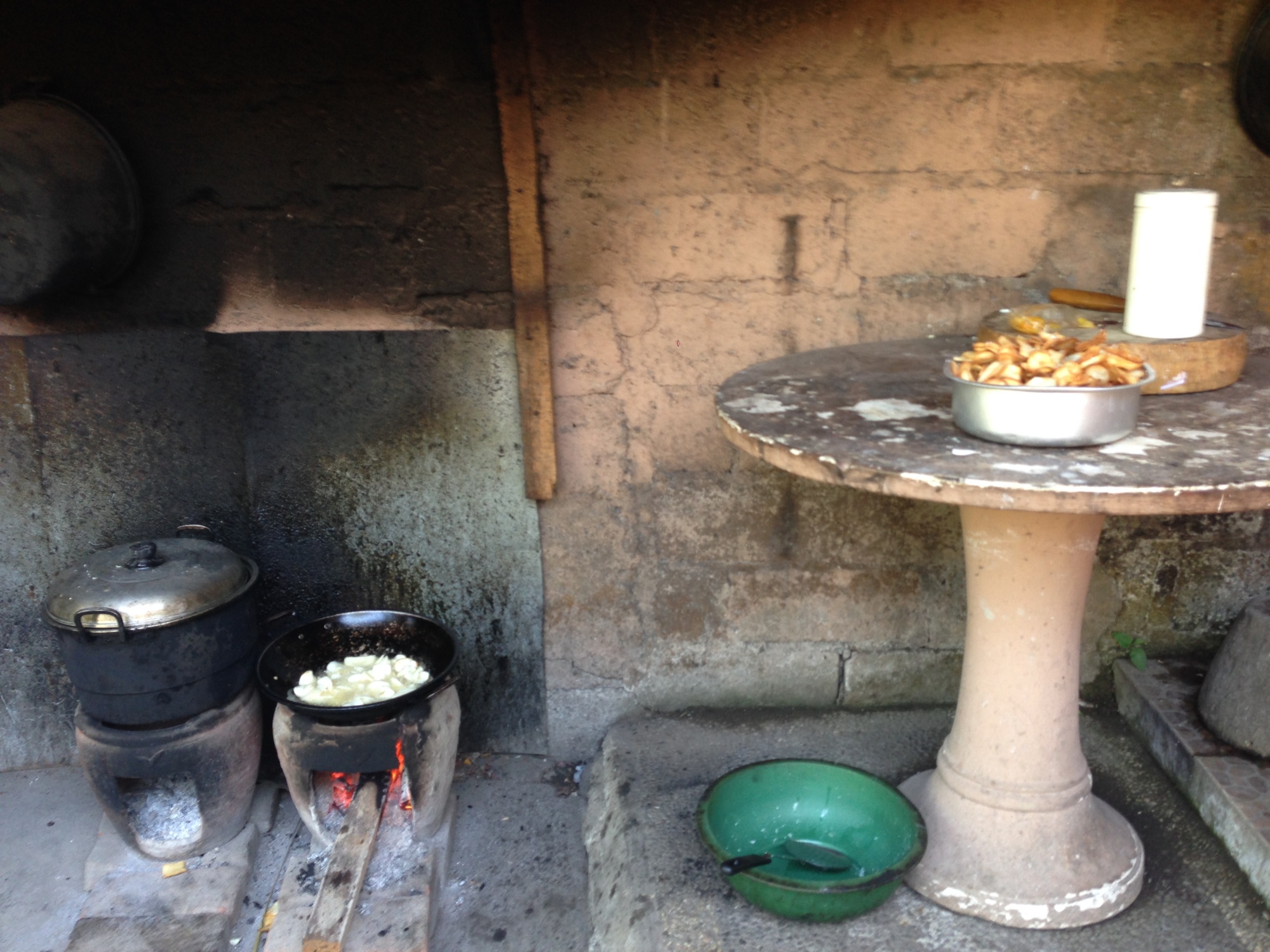 Today was a real Balinese Day, I always try and live as the locals do and not to live too much as a tourist so when my host offered to drive me to her little village just outside of Ubud so she could show me where she grew up  and to meet her family, I was excited for this opportunity. Her and her husband often jokes about the small village where she grew up and how she grew up with chickens and pigs. Which isn’t too far off on how I grew up…..

In Bali everyone has one of four name options that describe your birth order: The firstborn is “Wayan” or “Gede” or “Putu”, second is “Made” or “Kadek”, third is “Nyoman” or “Komang” (Man or Mang for short), and fourth is “Ketut” (often elided to Tut). (The vowels are pronounced vowels similarly as in Spanish or Italian) but they are given a second name as well in order to tell them apart.

My married couple villa hosts, Made and Made (pronounced Mah-day ) do not speak a great deal of English, but as a second language most likely picked up just renting rooms they do one heck of a great job. We get by with a mix of English, Balinese and charades.

Made had her daughter Made, (addressed as Vera) who is 7 years old join us on the journey.

Coming from a large family of 10 siblings. I have one perfect niece, 3 perfect nephews and another perfect niece due soon by 3 of my sisters, I am very comfortable around kids and much prefer their company over most adults. It was nice to have the extra company.

Made, Vera and I all get on the moped for our 4o min journey to her small village- riding on the back of a moped is an experience in itself I can assure you. Vera stands in-between her mothers feet, her mother is in the drivers position and I accompany the back seat holding sweet potatoes.

In Bali each village has it’s own Local Law and community temple and in each village home they have their own temple where they give offerings up to several times a day as a majority of the island’s religion practices Balinese Hinduism. Our first stop is to tour the village temple and in order to enter I had to wrap a scarf around my waist to separate the pure from the impure. Vera wanted to join me on my temple tour, she does not speak much English (or was too nervous to) and my Balinese is very limited, but like all Balinese people she was happy and we toured in silence and a few bouts of laughter for no particular reason. Our only conversation was when Vera looked at me and said “Kay-LEE” and then points to herself and says “Ver-Ah”. It was pretty adorable, I think we became friends after that.

We came across a section over looking the river where there was an old lady looking about 70 years old sitting in the river naked from the waist down. I wasn’t sure how to react feeling like I interrupted a cleansing ritual or maybe some bathroom time, so I followed Vera’s lead as if seeing it was no big deal.

We were the only ones inside the temple and all doors were open- so we helped ourselves to as many nooks and crannies as we could. The temple was large and like most temples has wonderful architecture- we honestly could have spent hours there but didn’t want to keep her mother waiting for too long.

We continued into the village where I was quickly the only white person/tourist and went into her home up until she was married 10 years ago and greeted her sister in law holding her adorable baby boy of around one year old. They offered me Bali Coffee, which is basically grainy tar with hot water with some coffee flavoring, tea and cookies. They also offered me some food so we ate the rice and veggies with our hands.

Her father popped his head up from over the concrete fence from working in the garden to see what the commotion was and then he made his way over to greet me. He was a man who had leathery skin, no doubt from working in the sun for many years. He looked between 70-80 years of age. He was wearing rubber rain boots, shorts, a t-shirt and one of those fishermen style hats. He was holding a gardening tool which could easily double as a murder weapon in a scary film. He came over to shake my hand and I gave him the best ‘Nice to meet you’ in Balinese. He didn’t say anything in return so I was certain my best Balinese wasn’t so great after all. Made informed me that her father doesn’t hear well after an accident, oh and he’s 3 years away from his 100th birthday.  Is his hearing ‘accident’ working on a farm all his life and being nearly ONE HUNDRED? Was my first thought.

The rest of the afternoon everyone spoke in Balinese as her family and passing villagers spoke no English. I have been able to pick up over 2 dozen words in my 7 weeks here- but unless we are greeting, ordering food/drinks, counting or giving directions there isn’t much to talk about with me. They seemed to enjoy just sitting in silence with light talk, they didn’t act rushed no one was coming or going, they seemed to be speaking of nothing too intense and everyone who walked by (we were on the entrance house steps) either stopped to chat carrying hay for the cows, recently chopped herbs, water buckets or passed with a fantastic smile shouting some sort of hello passing by on their moped.

Around 6 pm in the local village everyone supposedly strips down naked and all bathes in the rice paddies so we left around 5pm.

Made tells me that her village is very small and very poor, but the market prices are great! I have to say that perhaps they do not live extravagantly with many ‘things’ – but they had a great home with several compounds, they are rich in culture, family, religion and their home is a place full of laughter, hard work producing for their family, love, rituals, ancestors and many generations. The Balinese have expansive compassion, patience and really ensure that family is first.

The simple life is something I have always dreamed about. No more rushing off to appointments, useless small-talk, corporate ladders, constant options, overspending on items filling a house that is too large for me and wasting, wasting, wasting.

Perhaps 2015 will be the year of balance between the world I grew up in and the one I am living in now? Keep posted 🙂 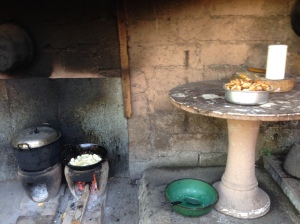 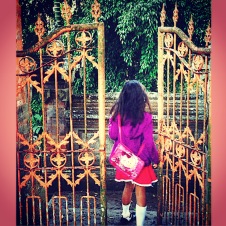 The rice field walkways into the homes: 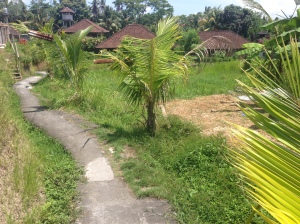 On the left are the resting places of remains of their ancestors and on the right a local artist: 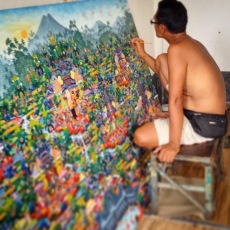