I was lucky enough to be wrapped in Kimono by Melody in Japan to tour Old Japan at Sankeien Garden.

I was wrapped in traditional Kimono during my trip to Japan- if you ever have this opportunity to experience this tradition I encourage you to accept the honor. The whole ordeal took about 45 min- if not done in the properly you’ll be ‘dead’. In Kimono dressing it is always left over right when wrapping the under garments, then the dress- NOT right over left, unless you’re dressing the dead.

Sankei-en is a traditional Japanese-style garden in Naka Ward, Yokohama, Japan, which opened in 1906. Sankei-en was designed and built by Tomitaro Hara, known by the pseudonym Sankei Hara, who was a silk trader. 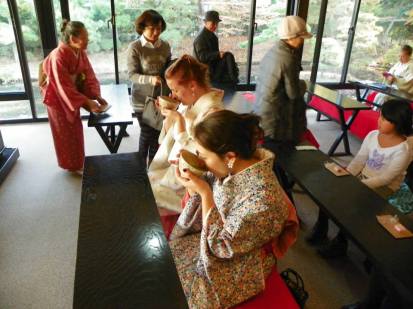 We walked the Gardens and attended a tea ceremony and drank Matcha Green Tea. It was truly magical walking around ‘Old Japan’. The architecture was so unique, inviting and inspiring. You cannot wish but to have lived in such a space. 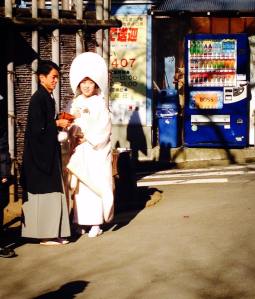 There were several wedding photos taking place. The brides were SO extravagant.

I felt like a celebrity as there was a photography class touring around as well and I must have had 6-10 cameras pointed at me at once taking my photo because I was dressed in Kimono, directing me in Japanese with my sisters help to translate. The Japanese seemed very proud that I was honoring their traditions, and I could not have been happier at that moment.

When ever I travel I hope for the opportunity to feel and live the culture of that land, I felt like this mission in Japan was a success. Japan will always be a special place in my heart.